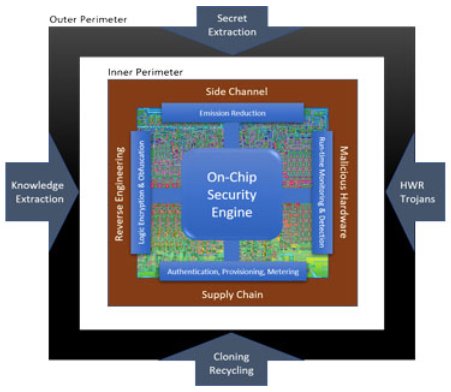 This week, DARPA gained another partner to its —Secure IC—to develop “.” This announcement marks yet another manifestation of how manufacturers are looking to secure IC design, both at the hardware level and throughout the supply chain.

DARPA has a long history of focusing on IC design security. Image used courtesy of

Modern systems are always potential targets for cyberattacks, which has made many manufacturers increase security requirements from processors to ICs. A higher level of protection can be achieved by integrating security subsystems within a system’s IC. These subsystems can secure data and cryptographic keys when they are being stored, transmitted, or in use.

A system’s virtual machine will always return to view the last inputted data, which leaves the system susceptible to different attacks. , attacking a system's:

Confidentiality threats occur when untrusted components directly read the information inside a virtual machine. Integrity attacks can present themselves during data replays, file corruption, and data re-mapping. Availability attacks impact availability for users with the denial of service, interrupting access to information, devices, and network resources.

Physical access attacks can occur when an attacker plants an infected USB drive or device in order to capture confidential data. Since this threat allows attackers to access data within minutes, early detection is crucial. The reality of these physical attacks makes it crucial for designers to consider countermeasures to secure different layers of a subsystem.

As an illustration of how manufacturers are guarding against these threats at the subsystem level, here are a few examples of semiconductor companies that have recently released security platforms.

NXP says its  that aims to protect IoT edge devices.

The subsystem has its own dedicated core, internal ROM, and secured RAM, all while storing and protecting cryptographic keys to prevent physical and network attacks. NXP’s EdgeLock Secure Enclave is designed to monitor for integrity and availability threats that can come from untrusted devices.

Block diagram of the i.MX8ULP processor, including a self-managed security subsystem. Image (screenshot) used courtesy of

The Enclave also provides a flexible array of controls to extend security practices that include run-time attestation, trust provisioning, key management, and managing agents to look beyond standard cyberattacks.

Another manufacturer addressing security vulnerabilities is Advanced Micro Devices (AMD), which has been at the forefront of producing high-performance computing, graphics, and visualization technologies. , the AMD EPYC 7003 Series with a security subsystem, .

While AMD’s Infinity Guard was used in the previous AMD processors, it now has expanded capabilities. The Infinity Guard is built-in at the silicon level and offers a unique feature that was introduced back in 2016, called secure encrypted virtualization (SEV). SEV allows processors to have a separate layer of protection through 509 encryption keys that are only known to one given processor.

AMD’s Infinity Guard is able to address confidentiality attacks by addressing threats at the register state before it exposes any data to an untrusted device. Physical attacks are more complex and require a significant level of local access and resources to perform. What AMD can ensure is the ability to monitor and alert trusted devices if a threat is approaching.

Founded in 2014, Tortuga Logic has vowed to provide security verification throughout the entire lifecycle of a semiconductor chip's development. Earlier this month, , which expands the company's security portfolio.

This platform is being utilized in Tortuga’s Radix technology, a series of devices that will detect and prevent security vulnerabilities. The Radix solution provides designers flexibility by easily fitting into existing SoC and FPGA setups without additional components.

Security subsystem domains share one goal: to control security-related assets and services. There is no clear path or blueprint to follow when creating defendable security subsystems. While the architecture may vary slightly between each manufacturer, many share similar layouts.

What questions do you have about hardware security? Share your thoughts in the comments below.

REF: Hearing Aids Supplier , Hearing amplifier, Digital Hearing Aids
The article comes from the Internet. If there is any infringement, please contact [email protected] to delete it.