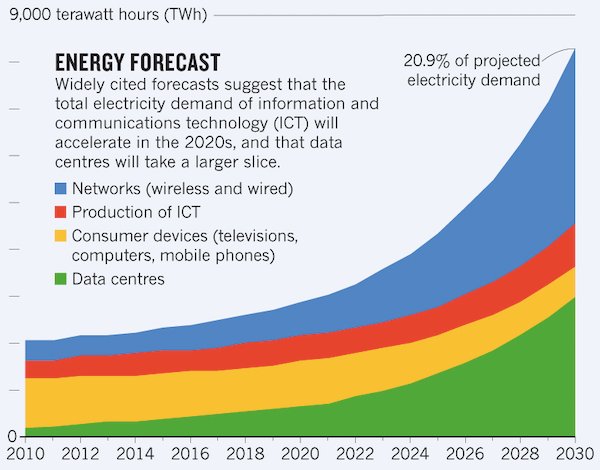 A Nature report predicts that the information and communication technology (ICT) sector alone, which consists of data centers, consumer devices, and networks, is expected to account for .

The Internet of Things (IoT), on the other hand, is a field that has the potential to benefit the environment in more ways than one.

IoT, Edge Computing, and the Environment

One way in which. While data centers are responsible for approximately 2% of global CO2 emissions, edge computing is significantly more sustainable for two main reasons.

First, edge computing helps reduce network traffic and cloud data center usage. Edge computing means that information, which would have otherwise been sent to data centers, is instead processed on the device. This reduces the energy spent on traversing a network and frees up bandwidth over the network.

Yesterday, Akamai, a self-proclaimed leader of the intelligent edge, announced . The company, which currently hosts 325,000 servers in 1,435 networks globally, intends to tap into machine learning to cache the most essential data to edge servers and eliminate extra trips to the data's origin. Not only will this initiative conserve memory and CPU power consumption, but it may reduce carbon emissions as well.

Edge computing is inherently designed for power efficiency. Most edge devices are battery-powered and resource-constrained, meaning their energy budget is very limited. Still, this year, many semiconductor suppliers have pushed the limits of these already low-power designs even further with, for example, and .

Manufacturers like Aspinity are getting creative with ways to conserve edge computing power, as represented in this “analyze-first” architecture. Image used courtesy of

Further, , making their energy sources 100% renewable. Some of these techniques include , , , and , or a combination of multiple energy sources.

IoT is also heralded for its sustainability because of the many “green” applications in which it's deployed.

One popular environmental-facing embedded application is wildlife tracking. For example, the , a species that has seen a huge population decrease over the past decade.

Tracker affixed to a harbor seal. Image used courtesy of the

The scientists will be able to observe and analyze patterns in the seal’s behavior to sketch a complete picture of the population’s decrease and hopefully prevent its extinction.

The consumer-facing notion of . A modern smart home includes many interconnected sensors that adjust the environment for energy efficiency: smart homes can detect when the house is vacant and turn off lights and lower the thermostat to help save energy.

. To commemorate Earth Day, using a series of .

Energy-efficient embedded designs also play . Smart farming uses IoT devices to constantly monitor and control a crop field (for example) for improved efficiency. In fact, last year, we reported on, that are used to monitor how temperature, humidity, and ambient light affect crop growth and even the respiratory conditions in farm calves.

Cornell researchers encased each ChipSat and sensor unit in a foam cup to protect temperature readings from being skewed by sustained sunlight exposure. Image used courtesy of John Munson and

Using IoT solutions, farmers can reduce waste and enhance productivity, enabling the efficient use of resources such as water and electricity. Agriculture is a notoriously large contributor to CO2 emissions and resource consumption, and improvements in this field could have huge impacts.

The Most Sustainable Technology?

Power efficiency is never far from an engineer's thoughts—but this focus is often primarily linked to design-level considerations—not environmental ones. Still, the ramifications of energy-conscious designs make a significant impact on sustainable electronics as a whole.

Between offering extremely efficient operations, utilizing renewable energy, and enabling a plethora of environmentally-friendly applications, there is certainly .

Link：In Celebration of Earth Day: IoT May be the “Greenest” Type of Embedded Design

REF: ITE hearing aids, Hearing Loss, Digital Hearing Aids
The article comes from the Internet. If there is any infringement, please contact [email protected] to delete it.

Why should CNC machining leave a machining allowance on the workpiece