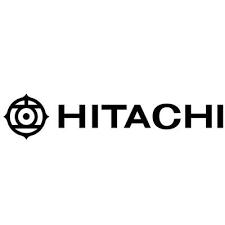 Hitachi is listed on the Tokyo Stock Exchange and is a constituent of the Nikkei 225 and TOPIX indices. It is ranked 38th in the 2012 Fortune Global 500 and 129th in the 2012 Forbes Global 2000.
History
Former Hitachi logo (1968–1992)
Hitachi was founded in 1910 by electrical engineer Namihei Odaira in Ibaraki Prefecture. The company's first product was Japan's first 4-kilowatt (5 hp) induction motor, initially developed for use in copper mining.
World War II had a significant impact on the company with many of its factories being destroyed by Allied bombing raids, and discord after the war. Founder Odaira was removed from the company. Hitachi's reconstruction efforts after the war were hindered by a labor strike in 1950. The company saw an increase in business during the Korean War due to defense contracts offered by the American military. Meanwhile, Hitachi went public in 1949.
Hitachi America, Ltd. was established in 1959. Hitachi Europe, Ltd. was established in 1982.
Former Hitachi logo (1992-2001)
In March 2011, Hitachi agreed to sell its hard disk drive subsidiary, HGST, to Western Digital (WD) for a combination of cash and shares worth US$4.3 billion. Due to concerns of a duopoly of WD and Seagate Technology by the EU Commission and the Federal Trade Commission, Hitachi's 3.5″ HDD division was sold to Toshiba. The transaction was completed in March 2012.
In January 2012, Hitachi announced it would stop producing televisions in Japan. In September 2012, Hitachi announced that it had invented a long-term data solution out of quartz glass that was capable of preserving information for millions of years.
In October 2012, Hitachi agreed to acquire the United Kingdom-based nuclear energy company Horizon Nuclear Power, which plans to construct up to six nuclear power plants in the UK, from E.ON and RWE for £700 million.
In November 2012, Hitachi and Mitsubishi Heavy Industries agreed to merge their thermal power generation businesses into a joint venture to be owned 65% by Mitsubishi Heavy Industries and 35% by Hitachi. The joint venture began operations in February 2014.
In October 2015, Hitachi completed a deal with Johnson Controls to form a joint-venture that would takeover Hitachi's HVAC business. Hitachi maintained a 40% stake of the resulting company, the Johnson Controls-Hitachi Air Conditioning.
In May 2016, Hitachi announced it was investing $2.8 billion into its IoT interests. In February 2017, Hitachi and Honda announced a partnership to develop, produce and sell motors for electric vehicles.
On March 14, 2018, Zoomdata announced its partnership with Hitachi INS Software to help develop big data analytics market in Japan. In December 2018, Hitachi Ltd. announced it would take over ABB Ltd.'s power grid division for $6.4 billion.